By Tammy of Musing of a Working Mom

Pumpkin, my oldest, turned 5 this summer and the kid is obsessed with birthday parties. She comes up with so many party themes that she’s got her birthday celebrations planned out for at least the next five years. (If you’re curious, future events may involve Star Wars or roller skating.)

This year, we decided to have her party at the i.d.e.a. Museum, a local children’s museum where we are members. The party includes the room, some decorations and an art project for the kids,  plus admission to the museum all day. It’s pretty low maintenance, but we wanted to put our own spin on it nonetheless, so Pumpkin and I settled on a donut theme. She loves donuts! (But who doesn’t?)


She helped me pick out the plates, napkins, straws and candle from our favorite local party store, Petite Party Studio, and the canisters for the donut holes from Michael’s.  We ordered invitations and a banner from Etsy.


I wanted to include her in the planning because she definitely has her own ideas about how things should be, but I wanted to have a few surprises, too. 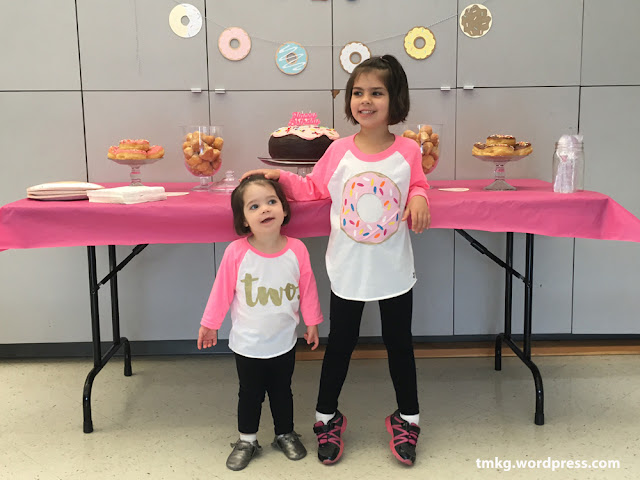 Donut Shirt
Pumpkin didn’t know until the day before the party (her actual birthday when she opened gifts at home) that I ordered her a special shirt to wear. Funny story – remember earlier when I told you she loves birthdays? Well, on her birthday, she woke up at 1:30 in the morning ready to start the day. Luckily, my husband was able to get her back to sleep. Then on the day of the party she woke up and got dressed in her new shirt before ever coming out of her room. She still needed a shower before the party so I had her change pack into pajamas, but we were cracking up because this is something we ask her to do every day before school but she has only ever done it once or twice before – she was just so excited for her party! 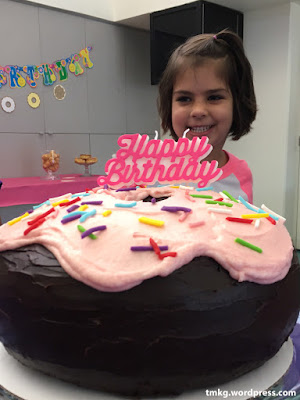 Cake
She knew I would be picking up donuts and donut holes for the party, and serving flavored milks for the kids and cold brew for the grown-ups. She didn’t know that I also ordered chocolate cake (her favorite!) shaped like a donut. It was a hit!


Donut Seed Favor Bags
I will confess that I’m not a huge fan of party favors because our kids have so much stuff already. (In fact, we usually ask our guests not to bring gifts, although this year Pumpkin requested donations instead.) When we’ve done parties before, the gifts have been edible, and they were this year as well! She picked her favorite patterns of Bumkins’ small snack bags as favors (which I love because they are reusable and machine washable, and she loves because they have her favorite characters). The surprise for Pumpkin was what I put inside – donut seeds! These were simply strawberry and chocolate Cheerios mixed together. We rarely get chocolate cereal (this was actually probably a first in our house since we’ve had kids) so the girls were pretty excited. Pumpkin had a great time at the party painting and playing with her sister and their friends at the museum – and of course, all the sugar involved! If you can’t splurge a little on your birthday, when can you?
Share

Neutral Language: How to Talk to Babies + Toddlers at Mealtime

Sneak in Veggies with these Quick + Cheesy Zucchini Boats